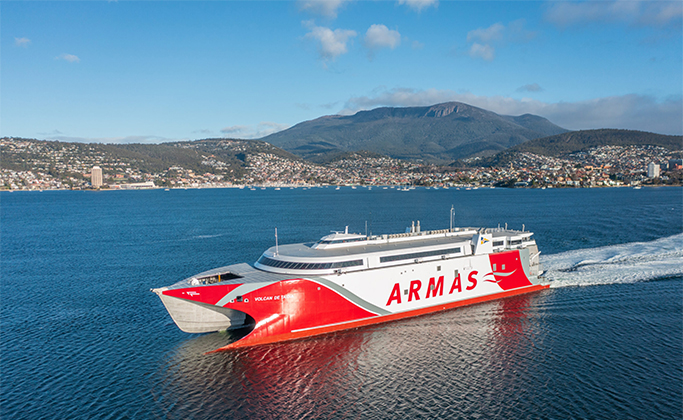 In September 2021, PCP IV provided a term-loan to the owner of an Incat-built high-speed catamaran, Incat hull 093, known as Volcán de Taidía. The 111 metre catamaran will operate in Spanish waters alongside sister vessel Volcán de Tagoro which was delivered by Incat to Spanish operator, Naviera Armas in 2019. The proceeds from the PCP loan were used to enable the Owner to complete the acquisition of the vessel from the shipyard and to repay construction financing from Export Finance Australia used by the shipyard during the build. The vessel is leased on a long-term contract to Naviera Armas and will operate between Las Palmas de Gran Canaria and Santa Cruz de Tenerife.

The vessel was constructed in Hobart, Tasmania, by the family-owned Australian shipbuilder Incat. The shipyard incorporates more than 70,000 m2 of undercover production halls and two dry-dock areas. Incat has successfully constructed close to 100 vessels since its inception in the 1970s.

The vessel is a 111-meter Wave Piercing Catamaran with capacity for 1,200 passengers and a maximum deadweight of approximately 1,000 tonnes. The vehicle deck allows for almost 600 TLM (595 truck lane metres) plus 219 cars, or in car-only mode it can accommodate 401 cars. The vessel is powered by four MAN 20V marine diesel engines with the latest technology and improved fuel efficiency driving Wartsila waterjets and achieved over 42 knots with 600 tonnes deadweight during sea trials.

David Ullenius, Managing Director: “We are happy to deepen our relationship with Incat and we look forward to continue our involvement with Incat’s state of the art high-speed catamarans over the coming years”.